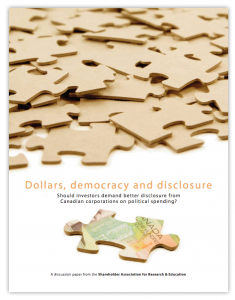 Dollars, democracy and disclosure, a recently released discussion paper from the Shareholder Association for Research & Education (SHARE), looks at the question of political spending by Canadian corporations, from an investor perspective.
It is the second in a series of papers to be released as part of a three-year project to encourage dialogue among capital market participants about how Canadian corporations’ influence on public policy debates and decision making affects the interests of long-horizon investors. The J.W. McConnell Family Foundation is proud to be a supporter of this paper.
Read Dollars, democracy and disclosure