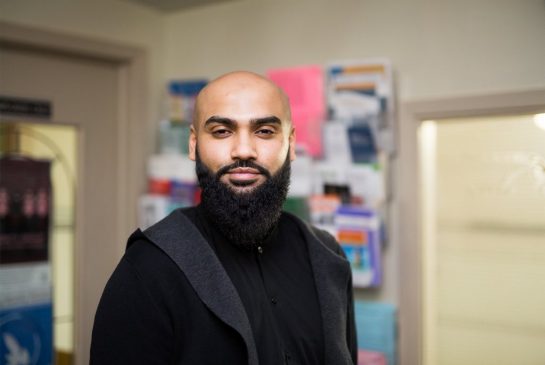 When you were younger, what did you want to be when you grew up?

I wanted to be a basketball player. That was my sole ambition for many years. When you are young, your world is very small and the professions that you know are fairly limited. I grew up in an immigrant household where we were always striving to be either doctors or engineers or accountants, or at least those are the types of things of which our parents would have felt proud. Around the high school years is when the ambition to be a professional athlete slowly starts to be less of a realistic goal, and you try to focus your energy on things that might be more realistic. For me, at that point, I still didn’t know what I wanted to do. I studied a whole range of things at university, largely in the humanities and social sciences.  I was always very attracted to the arts, particularly literary arts and literature. And that’s where I got a lot of my start early in my life — in the non-profit sector, particularly in the arts.

I run a non-profit agency, and what I’ve been doing in that past number of years is leading organizations in different fields. In my previous world, it was largely in advocacy within the arts. This is my first foray into the social services sector. Largely what I’m doing is running organizations, and, in my mind, doing the kind of meaningful work that I think helps.

Now, we’re increasingly saying: “Let’s do a lab. Let’s bring people in. Let’s prototype an idea, let’s test it out. Let’s get people who are immediately affected by the problem involved in the process much earlier on rather than at the later stages.”

Are you a social innovator?

It’s an odd thing. I’ve never considered myself a social innovator. I’ve certainly seen the term quite a lot more recently. We [at IFSSA] operate largely in a traditional non-profit sense. Increasingly, I am looking at different models, different ways of thinking, of how we can provide our services. In everything — from the ideation of new programming to the actual service delivery part of it — we’re constantly trying to innovate. In that sense, I’d say in a larger sense, I do think of myself as a social innovator.

What is social innovation to you?

At its essence, I think it’s a reimagination of how organizations or even individuals see themselves as part of a larger system. In my work, it means everything from the way in which we look for funding to how we incorporate our clients into the development of our programming.

How does your current work relate to social innovation?

There are certainly intersections. We’re experimenting with some social enterprises. We’re considering ways in which we can deliver our programming in such a way that it can sustain itself beyond government grants or money from foundations. In other cases, it’s a matter of how we pilot a new project or program. Previously we would have done a community needs assessment, figured out where the gaps are in the service, and figured out where our particular niches are. That’s been the traditional model. Now, we’re increasingly saying: “Let’s do a lab. Let’s bring people in. Let’s prototype an idea, let’s test it out. Let’s get people who are immediately affected by the problem involved in the process much earlier on rather than at the later stages.”

Can you explain to me how an idea becomes something that actually transforms systems?

Usually, the idea begins with a problem. You look out into the world and see that something isn’t working for some people.  Someone who is an innovator, or who has ideas on how to change the way things are, applies a critical lens to the problems that they see. And it requires stepping outside of your comfort zone. It might mean having to invest some of your own money. It might mean quitting your job, or it might mean having to put in additional time to work on a pet project of yours until it begins to see fruition.

What mindset do you need to do this well?

I think you need to be fearless. You need to have a degree of self-confidence. You need to be able to think both practically but also impractically at times. Social innovators are the types of people who feel almost boundless in that. If there’s a problem, there’s a solution to it, and we’re going to find it.

And I think it’s the task and work of people in any capacity — the academic, the activist, the social worker, the artist — to shape the world that we want to see.

Impractical in the sense that often, when we look at big problems, the solutions are not clear. So, what is practical is what’s always been the case. I think the practical person thinks that it’s just impossible for it to happen. I think it requires a different way of thinking about the problem to kind of reimagine it, to flip it up on its head or to look beyond just your given variables.

If social innovation was a person, what would they be like?

I don’t think well in abstract like that, but I can tell you my mind immediately conjures a person who is white. And that’s because I find this field, like many, is severely lacking in diversity. When I attend events or conferences, I am often one of few people of colour and that’s a problem. Social innovation often tries to solve problems that acutely affect marginalized populations, or communities of colour yet they’re largely absent from these spaces.

Can you describe for me the scale of the problem that you work on?

I think the types of individuals who come to us are at their most desperate, or are having a very difficult time, and so we try our best to alleviate some of that or to carry them through to the next stage. We try and empower our clients so that they can lift themselves up. Usually the problems are not singular. If someone is coming to our food bank, the problem isn’t that they’re not able to make enough money to pay for their grocery bills, the problem is usually deeper than that. It’s probably because a large portion of their income goes to housing. So there’s an affordable housing problem there. If you look deeper than that, it’s an issue of precarious employment or under-employment. There’s a whole range of cases that we see that address an individual need and tackle a larger social problem.

Do you think social innovation is revolutionary in the sense that it’s actually able to transform these systems?

I think it has the power or potential to do that. I think it’s a matter of testing and sometimes, although the effect might be small or limited, it could be replicated in another place where the population size is significantly larger, and the impact is much wider.

You’re saying that innovations can be small, but they can replicate into something larger?

For example, we’re doing something in housing right now that is fairly revolutionary in the sense that I haven’t seen it applied elsewhere. It’s a unique concept. Within the Islamic faith, Muslims are encouraged to pay zekat, which is charitable alms giving. Historically, what’s always been done is that that amount is just given directly to the poor. What we’re doing is potentially using some of that money to not just pay for a food hamper, but we try to incorporate an affordable housing project where the zekat money is used to subsidize someone’s rent on an ongoing basis—a part of wealth creation. We’re testing it out right now, right here in Edmonton. If it works out, if there’s a success story here, then I can imagine it being applied in urban populations that are larger, that have a higher concentration of Muslims that might apply the same model. And so what might affect a few thousand families in Edmonton might affect tens of thousands of families in Toronto or in other places in the world that have a concentration of Muslims who end up giving the zekat money.

How do you balance all the progress but also all the challenges and regress? When you balance and average it all out, how do you feel about the world?

I’m generally an optimistic person. The world is a better place now than it ever has been. For my daughter, who’s 17 months old, when she gets to be my age, the world will look very different. It will be a much more just society for her than it has been for me. And it’s not to say that I’ve had a very hard life, but I see the inequities, I see the systemic racism, discrimination, that I, and many other people like me, have faced. So I think we’re moving slowly in a better place. And I think it’s the task and work of people in any capacity — the academic, the activist, the social worker, the artist — to shape the world that we want to see.