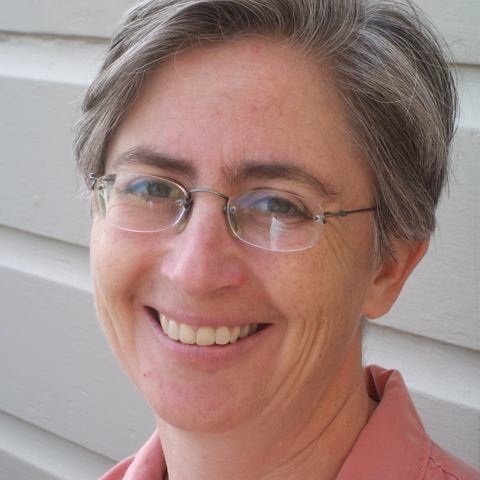 Lucy Bernholz is a Senior Research Scholar at Stanford University Center on Philanthropy and Civil Society, and director of the Digital Civil Society Lab. Her work is focused on understanding how people create, fund and distribute shared social goods in the digital age.

What did you want to be when you grew up, when you were little?

When I turned 50, I realized I probably had lost my chance to be an astronaut and I really missed it. So I felt like, “Oh that’s terrible!” I probably didn’t think I’d be running something called the Digital Civil Society Lab at Stanford University.

What did you become?

I’m a historian by training. I went to Stanford to study history. The question that I had, which is still the question that drives me today, is “What’s public? What’s private? And who decides?” In 1990, when I was asking this question as a doctoral student, the history department looked at me kind of cross-eyed — like, “What kind of question is that?” But then we found a way to think about it historically by looking at philanthropic dollars in public systems.

I did the dissertation. I had no interest in staying in academia, and I went and worked for foundations. I came to philanthropy through this academic question, then spent several years working in institutional philanthropy where I still had the question. More and more, I had the same question! I wound up running and building a consulting firm.

Perhaps, since I’m based in Silicon Valley, the nature of digital technology, its assumptions — and limitations — started more and more to dominate my thinking. But I was still asking the same question – what’s public, what’s private, and who decides?

In 2010, I realized that the question about what’s public, what’s private and who decides in digital space, in democracies, was such a big question for me, and I couldn’t find anybody who was looking at it through the civil-society lens. I was able to sell my company, go back to Stanford, and launch this lab. I’ve been asking the same question for 25 years, I still don’t have an answer!

How do you feel about the state of the world at the moment?

I’ve been in Canada for two days, so I feel better than I did two days ago. And I mean that. I’m a US citizen. I’m a US voter. I’m very unhappy about what’s happening in my country. I have been privileged to live all of my life in democracies, and have been privileged to live in democracies where I can loudly and vociferously disagree with my government. But I have never before been so deeply and completely offended by what my government is doing.

In this context, what becomes the task of the social innovation movement?

I don’t ally myself with the social innovation movement per se. I do believe that there’s a place for democracy in the world. I do believe that elected representative governments are our best choice given the alternatives.  I could quote Churchill, but I’m sure he’s been quoted, so I won’t.   What my work in civil society has always been about is that democracies depend on direct engagement with the political system and just as strongly they depend on our engagement with each other outside of that political system.

One does not stand without the other. If you’re a catastrophist, one of the easiest ways to understand that is to recognize that when autocracies begin, the first thing they try to do is shut down the independent space, either by directly shutting down the media, taking control over independent voices, or by quickly shutting down the place where people can come together and assemble. That’s how it happens. I’ve sort of spent my working life on the other side of that, trying to understand and invigorate and sometimes draw lines around what it means to be in that space and what our responsibility is to each other but also to this larger system.

The social innovation movement to me is a piece of civil society, and it’s a piece that’s very much focused, and developed, and shaped by an economic understanding of the world. And, so, I think, in my broader structure of civil society, social innovation is about finding and using a wide range of economic supports to allow people to do things for each other. That’s its purpose. That’s part of what it’s brought forward over the last 10 to 15 years.

Social innovation, by claiming this space, claiming a title, and building a movement and enticing new energy, changed the nature of the broader conversation about how broken the financial structures for this kind of work are. That, I think, is a really important change.

There are a lot of very substantial changes that need to happen in our society. There are two common ways of approaching such change: one is revolution, and the other is to find new models. Is there such a thing as transformative experimentalism?

That is a big question! There might be transformational experimentalism, but I don’t think social innovation is that. Social innovation, as I have largely understood it, takes for granted and doesn’t seek to change the corporate model, the role of privately subsidized or privately resourced public benefits. It doesn’t question the nature of what public good should be publicly provided. It may fill gaps where public sectors retract or in some cases where the public sector never dares to tread, but I’ve never seen anything that identifies itself as a social innovation that’s about changing the relationship between people and their government.

Nor do I see social innovations often changing the relationship between people and the marketplace. I don’t think it’s revolution, I think it’s evolutionary, it’s been on the market side, not on the government side. Where you see perhaps the parallel to social innovation movement is in good old-fashioned social movements. They are fundamentally designed for, aimed at, and intended to change the relationship between people and their governments. I don’t think social innovation is after that at all. Maybe I’m wrong, maybe I’m missing something. But I don’t see it.

I think it’s rare that the people leading these kinds of new ways of providing us something — a benefit— are actively trying it at small-size with the intention of changing the system. I haven’t seen a social enterprise, a social innovation, that was an intentional experiment, doing something small that’s gotten big and that’s fundamentally made systems change somewhere. I’d be happy to look at some examples if you give them to me, but none come to mind. I do see some that have started small and gotten big. But I don’t know how they’ve changed the system around them. Go ahead, give me one, I’d love to think about it for a minute.

Take what’s happening right now in the US. Charter schools, 25 years ago, were seen as the great social enterprise innovation. We have just put in power, through a very different process, a Federal administration that may actually be in a position to take what started small, and fundamentally change the system. If it’s not already clear, I disagree wholeheartedly with that change. So the question I would have back is, is that a successful social innovation movement? Or an example of a successful social innovation?

So how does social change actually happen?

Social change involves making people with power get out of the way and give it up.

Social change is no one-off. It’s going to be a long slog.  Social change involves making people with power get out of the way and give it up. [laughs] This doesn’t happen easily! It never has in the history of humankind.

Is there a role for innovation to be played in a change of power?

Yes, absolutely. The nature of power, how to hold on to it, how to build it, and how to manifest it is different in a network-distributed digitally-dependent age.

Information is power, always has been – but in the digital age, holding on to it, gathering it, and using it — these are a totally different set of skills and dynamics. I think of our lives now across the marketplace, government and formal institutions of political power, in civil society— it’s as if we can build these buildings, and they look like houses, and we build them to live on land, we build them in an analog world where information was controlled with door locks and safes.  Now we’ve taken our little houses, we put pontoons on them, and we’ve shipped them out onto Lake Ontario. We’re actually existing now on water instead of on land. And you know what, the houses float. But are you going to send them down the river? They’re not going to do so well on the St-Lawrence. They’ll do fine on a calm pond, but what we’re doing now, living on these little house boats is, many of us are saying, “hmm I wonder what a speedboat would look like?” Like, I wonder what a canoe would get – you know? Different kinds of crafts, custom-build for navigating on the water and not taking a house and putting it on pontoons.

So there’s a way that these two things — innovation and social movements — work together?

What gives you hope?

Two things give me hope. Curious people. It’s innate. You see it in toddlers – from toddlers on up. I mean, people are generally born curious. And I think we beat it out of them soon as they get out of diapers. The other thing is a sense of collective obligation that I must do more. Those two things: individual curiosity and that collective obligation that people make sense of all on their own. I don’t see too many people feel these two things, or embody these two things, and who are sitting still going, “It’s okay. Let the oceans dry.”