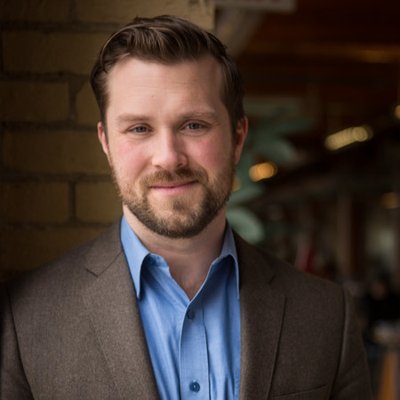 Jamie Biggar is the Director of Communications and Campaigns for the Centre for Social Innovation. Before joining CSI, Jamie co-founded Leadnow, Canada’s first digitally-empowered progressive advocacy group, and served as its founding executive director and campaign direction.

When you were young, what did you want to be when you grew up?

Biggar: I don’t remember from when I was actually young, but I think part of the reason for that is because I bounced around a little bit, there was never a core thing that … I was just astronaut or veterinary or marine biologist or whatever all the classics are. But for a long time, while I was in school, I was sure I wanted to go into academia. That was my main, consistent, several-years-in-a-row thought about I was going to be when I grew up.

What led you from that vision into what you ended up becoming?

Biggar: I took politics in undergrad. I took political ecology — which is just politics as though there’s an economy and also an ecosystem, and all three things matter — for grad school. Through that process I was getting more and more involved and interested in real-world politics and the activism that was going on around me. My first week of undergrad poli-sci was September 11th 2001. And then right at the beginning of grad school Hurricane Katrina hit — and there was a climate enhanced hurricane meeting all the failures of the political system that left New Orleans so vulnerable. It really felt like real-world events were pushing into my schooling.

There was an intermediary step — in grad school in particular.  One of my professors at the University of Victoria was named Michael M’Gonigle. He really believed in an activist, very applied role for academics. I got involved with him in campus sustainability work. He had a big vision of how universities could be hubs for social innovation in their regions – that they could be key regionally-based, regionally-focused, globally-networked hubs that would bring together their different resources (whether their purchasing power, their land base, their operations, their research and their education) to support those local transformations.

So I got really involved in that work.

You went to Copenhagen Climate Conference. How did that shape you?

Biggar: That was a transformative experience for me in a few different ways. I went to the Copenhagen Climate Conference in 2009 with the Canadian delegation. At this point, I had started to get more involved on the advocacy-activist side. We had succeeded in getting the Liberals, the NDP and the Greens to vote together for a climate bill. It didn’t have a huge amount of teeth. It was basically about setting a target that we would then work towards. But it did feel like a real win, at least in communicating to the world that parties representing the majority of Canadians wanted us to be doing something.

I had never [previously] spent any time with representatives from the African countries and small allied nations for whom the threat of climate change felt like a much more visceral, existential threat. There were these moments of listening to hundreds of people from these delegations – one in particular, hundreds of them were rallying and chanting: “two degrees is suicide, three degrees is genocide” — and that hit me super hard. I never thought about it in those terms. The reality of the death that would come from climate change — I never really felt that. And I really felt that listening to them.

Where my optimism comes from is a belief that more community and love-centric organizing can be connected to our increasingly rapid ability to take advantage of the opportunities that are now available to us to think and govern collectively in different scales that we ever have been able to before.

Then on the other side, watching your own government…  If you’ve grown up rather privileged in Canada, we have a really deep story of “Canada, the good.” And I remember in particular, there was one night where The Yes Men did this prank on the government where they released a press release saying that all of a sudden the Canadian government had taken all these incredibly progressive positions. I remember sitting with the rest of the Canadian delegation watching this happen and cheering it on. Because it was a great way of showing the gap between the Canada that could be and the Canada that is.

That night — I don’t actually know if this was strategic or coincidence — but it leaked that what Canada was actually going to be pushing for was even weaker than what they were saying they were going to be pushing for. I felt something I’ve never felt before as a relatively privileged child of Toronto and Canada — this sense of white-hot rage that I’d almost been kicked out of the house of Canadian society by my own government and was now on the outside, looking in.

Leadnow was founded in the aftermath of that major pissed off moment.

Now you’re over at the Centre for Social Innovation (CSI). What was it like for you to make that jump?

Biggar: I really like the creative collaborative optimistic, forward-looking aspects of social innovation. I don’t mean to say that activism isn’t creative and generative and beautiful in many ways, but it was important for me to rotate off of that trench and to go back into a place where I could regenerate my sense of hopefulness and possibility.

I was very happy to see that CSI is moving towards a real focus on social inclusion. With Adil Dhalla as our new executive director, and with CSI Regent Park Shilbee Kim and all the great folks over there, there’s been this new emphasis and work on the importance of social inclusion for social innovation – and broadly for the public, for the good. We have very practical work that we’re going to be doing on this through our Climate For Everyone Toronto campaign to help people learn how to be allies for communities under threat at this moment — to help build a Toronto for everyone, to convene people who are contributing to this and to support them in doing the great work that they’re doing as social innovators and social entrepreneurs, and as advocates.

What gift does social innovation have to give movement builders?

Biggar: I think one of the most important gifts is the emphasis on hopeful collaboration. We can’t go back to the world that we had in the 1960s and the 1970s. That’s not going to work, there’s no going back in time. We have to go forward. That means developing new ideas backed by new relationships between people that might spread across different political lines. Social innovation provides a bunch of tools and an attitude for helping to do that.

Social innovation is implicitly about doing things better than they were done before. A lot of people are motivated to do this because they care about the cause. And that’s great. It’s super important. The kind of rebelliousness and desire to shake things up and make things better is attractive and charismatic and helps you to bring together support.

Can you give me a brief arc of what makes a social innovation a successful one?

You have to be out in the field, but you also have to have a bit of the scientist’s view of the discipline in trying to unlock what other kind of deeper issues are in place.

How do you feel about the world these days?

Biggar: It’s so complicated, right? The climate change stuff is really hard. On the other hand, apparently the electric car revolution might happen super quickly! Part of why I left academia was because I was much more hopeless. I was a pessimist on all that stuff.

It is amazing the degree to which technology is giving people leverage to scale up ideas and to find each other and to collaborate. The Internet is providing us with a metaphor of the world that is very similar to the ecology of collaboration and self-organizing. Where my optimism comes from is a belief that more community and love-centric organizing can be connected to our increasingly rapid ability to take advantage of the opportunities that are now available to us to think and govern collectively in different scales that we ever have been able to before. So, it’s a moment of heaven and hell, and this happens all the time in history in periods when an old order is crumbling.