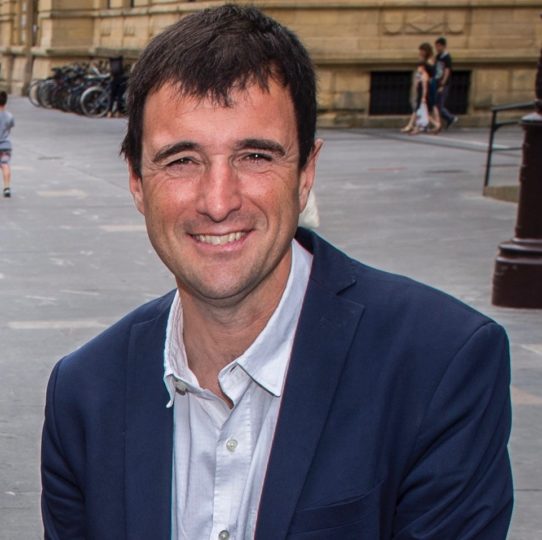 Gorka Espiau is Senior Fellow at the Young Foundation (United Kingdom) and Professor of Practice at McGill University. He was previously Director of International Affairs and Places program of the Young Foundation (London), Special Advisor to the Executive Office of the Basque President and co-founder of SILK, a social innovation laboratory.

Thank you to the Basque Broadcasting Services (EITB) for their support in recording this interview.

When you think back to when you were young, what did you want to be when you grew up?

I studied journalism so I guess that was what I wanted to be.  I’m from Bilbao de Basque and there was at the time a lot of violence and a deep social and economic crisis. It was a perfect storm at the end of the Spanish dictatorship. That has conditioned the way I see things and why I’m doing what I’m trying to do.

I don’t know. I have three kids. They keep asking me what I do and it’s really difficult to explain. Sometimes I respond that I am a journalist, just to avoid the complexity of explaining. But if we look at it from the social innovation perspective, I think I’ve become a movement builder around social innovation initiatives, connecting grassroots initiatives with public and private institutions in order to make them scale … But, it’s a very difficult definition.

Can you describe the scale of the problem(s) that you work on?

It depends on the place. For example, in Montreal, we are working on how to generate a movement of transformation in the city. We are talking about a very large scale. How do we connect the key institutions of the city — public and private — with ordinary citizens, in order to create a movement of transformation? These are very big worlds and it’s a very ambitious vision. But, at the same time, this has implications for how you tackle, for example, security or transportation in a particular street in Montreal. We are operating at the macro and the micro level all the time.

We’ve been asking all of the key protagonists. They never say “We made this decision, or we made the right investment.” They always refer to the values.

What are you learning about right now?

What does the cultural dimension of social innovation look like?

I’ve been involved in analyzing the transformation of the Basque area. It was a really difficult situation only a few years ago. Now we have a social-economic model that incorporates equality at the heart of the system.  We’ve been asking the key people that were involved in the transformation about why did they made certain decisions. For example, the decision of building the Guggenheim Museum by Frank Gehry in Bilbao. That idea is celebrated internationally. At the time it was a mad idea. To think, at the time, that the Guggenheim would come to Bilbao was totally irrational because there were no conditions for such a thing to happen.

Positive transformation is generated when everybody feels they are allowed to generate innovation.

We’ve been asking all of the key protagonists. They never say “We made this decision, or we made the right investment.” They always refer to the values. They always say, “we did this because we were serving a set of values about how to transform this society, and those values helped us to create a history of ourselves that was aspirational, connected with reality, and then the decisions were made based on those narratives and values.”

This is what we have documented, and this is consistent with a lot of research about long-term aesthetic decisions that are normally made based on values. There is evidence about how we make decisions. It is always a combination of rational, and value-based thinking. But we haven’t really explored what the soft cultural space is. Through an ethnographic process, we have identified in the case of Mondragon five core values that that are still present in that company today. If we can demonstrate that successful projects were actually implemented on a common value system, then we can understand a lot about how successful transformations in the social sphere — territorial but also thematic — incorporate this cultural dimension. By culture, we mean the set of values, the narratives, the beliefs and the aesthetic decisions that are made by a group, by a city, by a particular society in a particular period of time.

Is there anything you’ve noticed that people get wrong about social innovation?

For me, the most important thing is how innovation takes place at the community level. I think we have it totally wrong, applying the myth of the solo entrepreneur, the myth of Silicon Valley, which is all about the individual. This is false, it doesn’t exist, and when it happens, it has a negative social impact.

Positive transformation is generated when everybody feels they are allowed to generate innovation. We have seen this in the Mondragon experience, but we have also seen that in our work in Leeds, in the UK, and this is what we are documenting in Montreal at the moment.