By Laura Beaulne-Stuebing and Cara McKenna

The Moose Hide Campaign started out small, but has grown into a national movement to end violence against Indigenous women and children. It’s also grown into an opportunity for non-Indigenous Canadians to connect with, learn about and experience Indigenous cultural practices.

Moose Hide began on Highway 16 in British Columbia, also known as the Highway of Tears, where many Indigenous women have gone missing. In 2011, Paul Lacerte and his daughter Raven were hunting moose near the highway, and realized how close they were to a place of such sadness and heartbreak. That realization spurred on a discussion between the two that led to the campaign to get men to stand up against violence towards women and children.

Over the years and with a lot of work, Paul, Raven and their team have been able to bring the campaign to communities, schools, workplaces and other groups outside of B.C.

One step in this is its partnership with the MBA Games.

The MBA Games takes place from January 5 to January 7, 2018. It’s an annual competition among schools that offer a Master of Business Administration and has made the Moose Hide Campaign its designated charity for two years. In 2017, the MBA Games were hosted by Vancouver Island University and the partnership raised $300,000 for a Moose Hide initiative called Safe Spaces, which aims to prevent violence against women on university campuses. 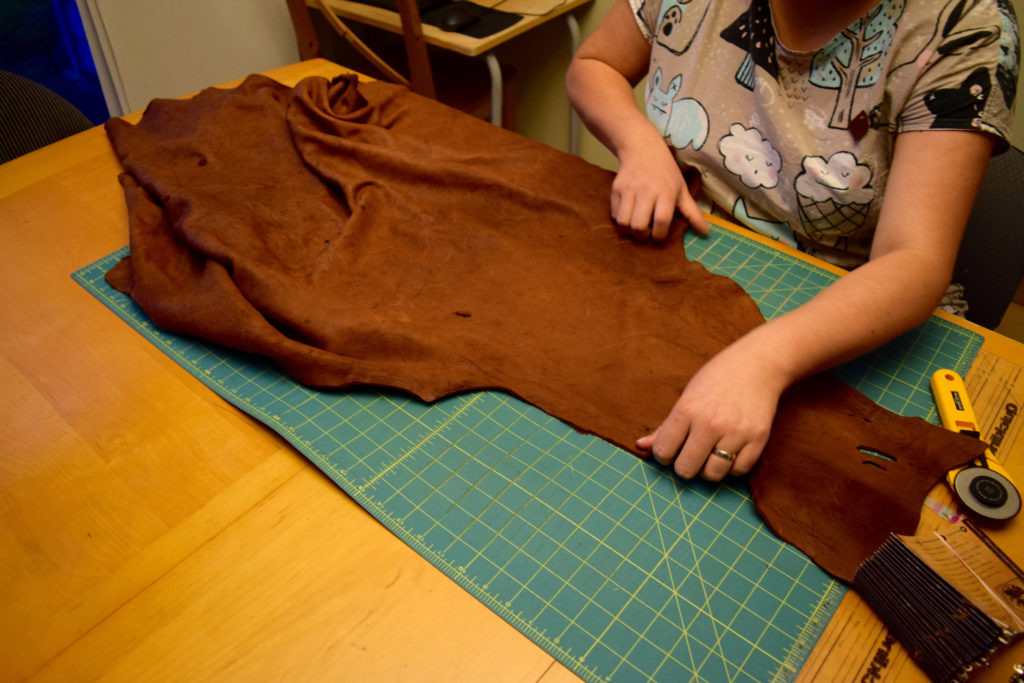 Moose hide squares, representing a commitment to end violence against women and children, have been pinned on the lapels of hundreds of thousands of men across Canada. Everyone from politicians to chiefs to famous athletes have let the world know they have taken the pledge simply by sporting a pin on their jacket or shirt. But what isn’t seen by the public is the four Indigenous women who cut the tiny squares of hide, one at a time, at their kitchen tables.

Emma Azzi and Eric Plant, chair and co-chair of the games, said the 2018 theme is “More Together” and that they want to highlight, for future business and community leaders, that when people work together and create spaces for diversity, more can be achieved.

They added that the Moose Hide Campaign and what the organization stands for fits perfectly with what they want to achieve with the games. The partnership is timely, they said, with the conversations about reconciliation taking place in Canada today.

Members of the MBA organizing committee attended the Moose Hide annual national gathering in Ottawa last October. The gathering was an important event for the Moose Hide Campaign and for those supporting its mandate, offering participants an opportunity to fast according to Indigenous tradition and ceremony, and to reflect on the violence that afflicts many Indigenous women, children and families. At the end of the day, participants broke their fast with a sunset ceremony and feast. 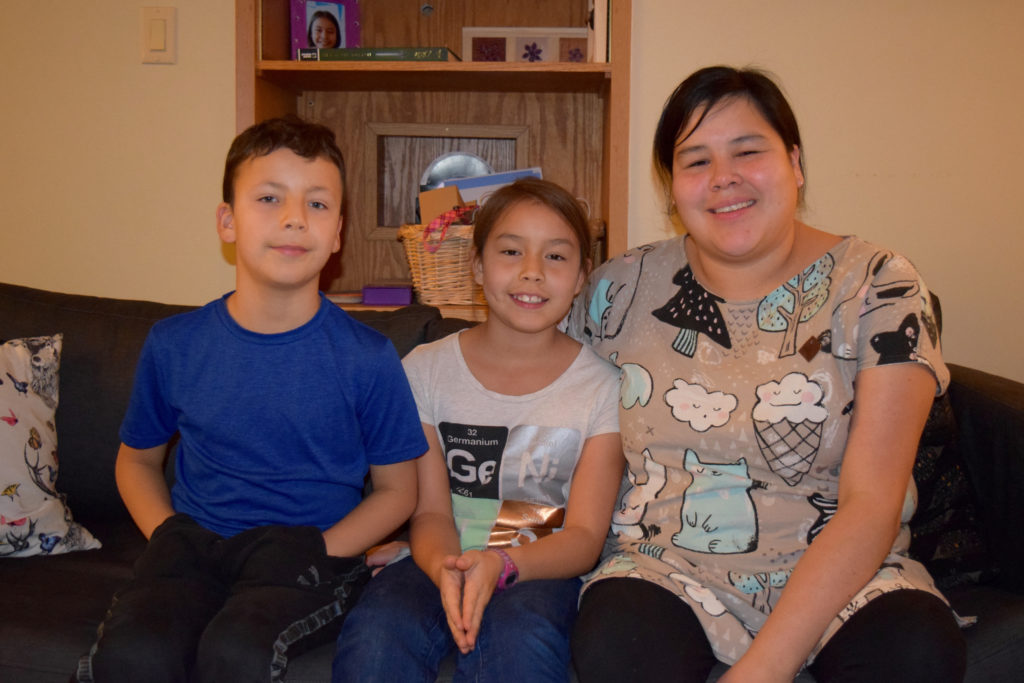 Paul Lacerte’s eldest daughter, Sheralyn MacRae, has been cutting moose hide for the campaign since the beginning. She works in the school system during the day, and she and her husband Andrew often cut, punch and pin up to 500 squares in the evenings after their two children, Jackson (eight) and Caressa (nine), go to sleep. MacRae lives in Saanich Nation territory, just outside of Victoria.

Yaprak Baltacıoglu, secretary of the Treasury Board of Canada, was one of several public servants who participated in the gathering. The event was outside the regular social practices of non-Indigenous Canadians, she said, and really gave participants a chance to take a “deep dive” into how Indigenous people deal with tough issues.

“What was amazingly good was people actually were…talking about an uncomfortable issue, and doing something completely outside the norm. And I think that was very valuable. You understand and respect in a different way,” Baltacıoglu said.

“It turned out to be a very rich…and reflective experience for people,” she said.

This was the first year that the Treasury Board Secretariat, which provides advice to federal ministers on government management and administration, participated in the campaign. 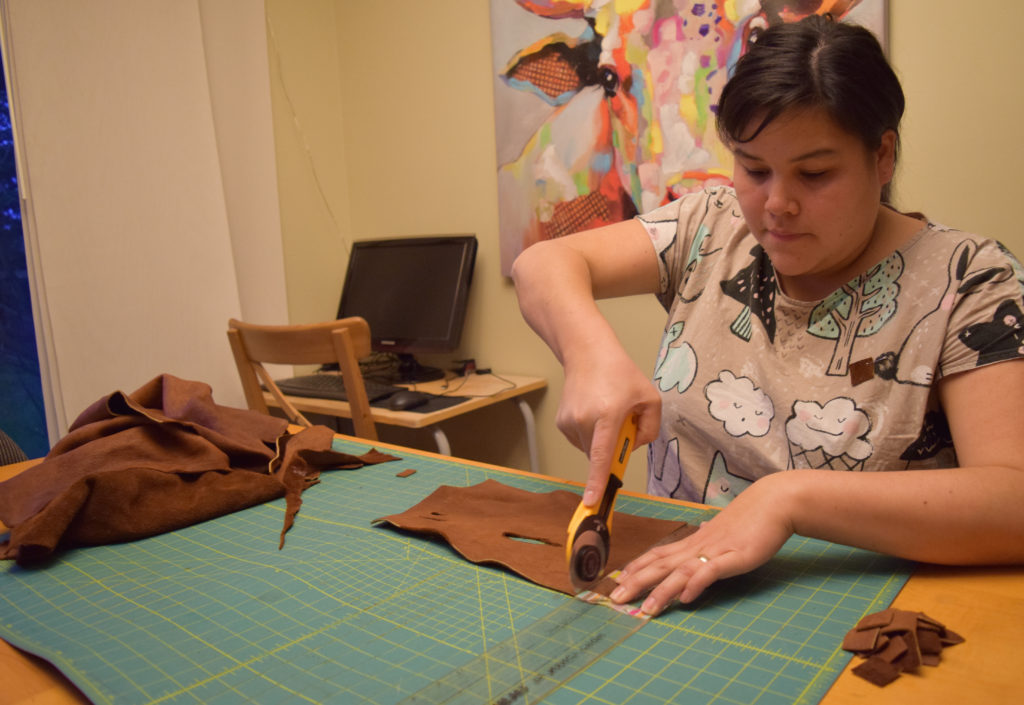 “I try to cut about 500 squares in a day, and then my husband will punch them because it takes a lot of strength to do that. Then when we’re done that we start the pinning. We also try to do about 500 pins in a day. Not every day. We do what we can, we have two kids and so we try to slip it in usually at night after they go to bed.”

Baltacıoglu said the Moose Hide Campaign had more support among workers at the Treasury Board than she’d expected. Even the minister, Scott Brison, and many of his male staff participated.

Getting police involved in the campaign has been key. Before Chief Superintendent Trevor Daroux joined the RCMP, he was working in a smaller police service in Alberta. He said he remembers the Moose Hide Campaign from those days, when it was in its early stages.

The RCMP has supported Moose Hide for many years, but at the divisional level. This year was the first time the RCMP’s nationwide headquarters was represented at the national gathering event, Daroux said. The campaign resonates with police. 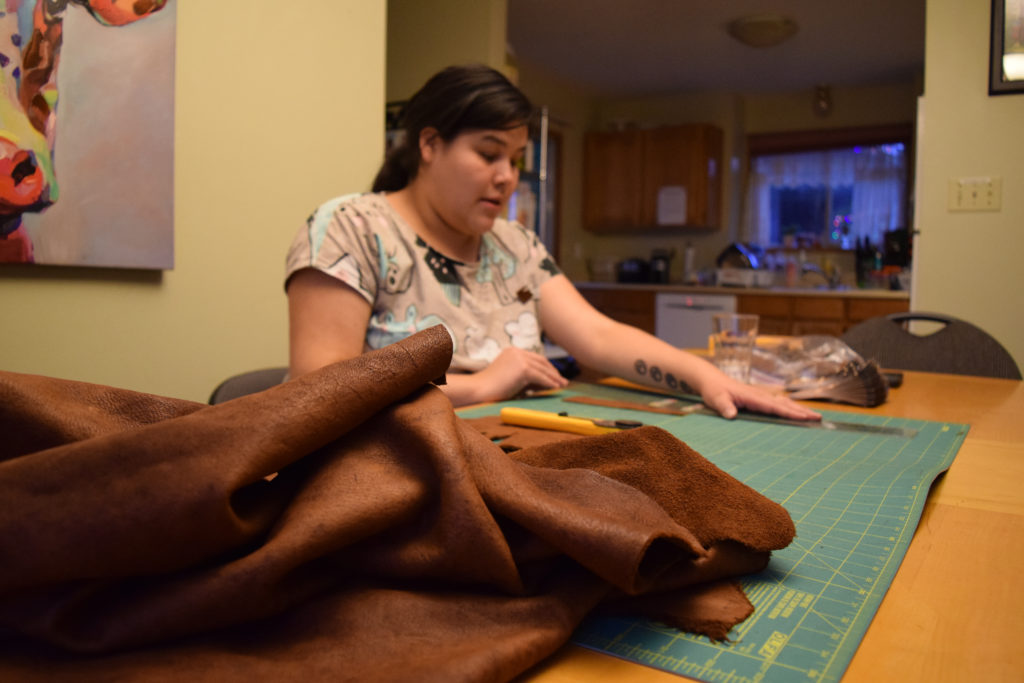 My grandma has given them [hides] to us; she used to tan hide using traditional methods. She can’t anymore, her arthritis made it too hard, but all of my childhood [in Northern B.C.] I was in the backyard watching her smoke her own moose hides. I would love to learn how to do it. I would love to go up and learn a bit more about beading and learn more about smoking moose hide.”

“You wouldn’t have to go far to ask any police officer who’s worked in frontline policing to give you examples where they’ve seen devastation of violence against women and children… The damage they see to individual lives, the damage that you see to families, the damage you see to communities,” Daroux said.

“So when you bring forward a grassroots campaign like this, it really does resonate,” he added. “Especially frontline police officers who’ve seen it themselves.” 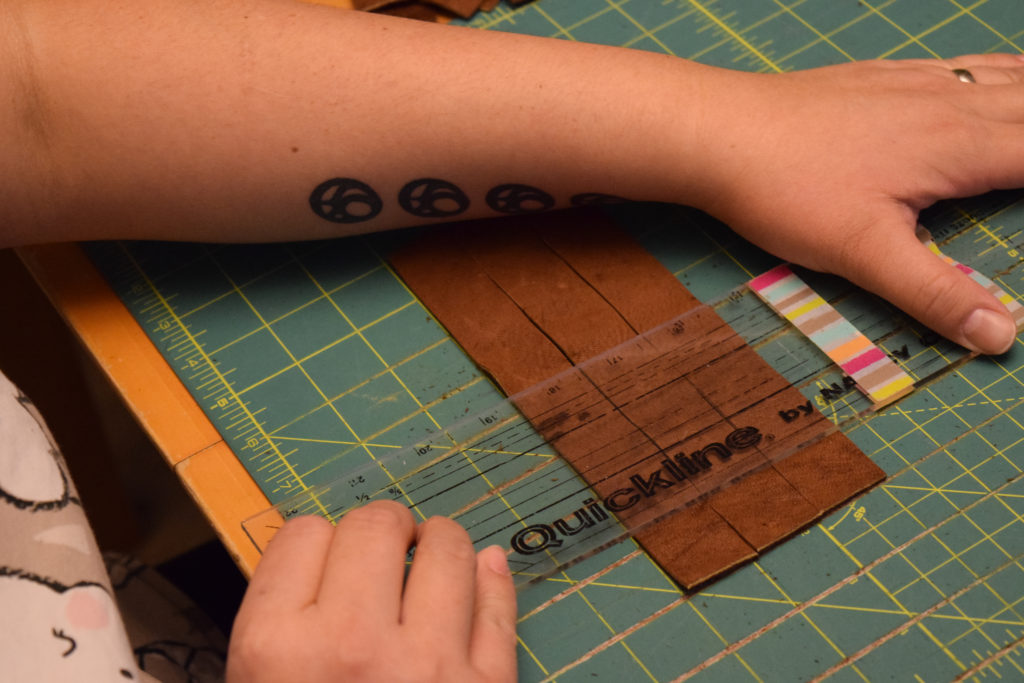 “When I started it was just to help my family out, I could see they were starting this campaign. I thought ‘this sounds great and I can help with that.’ It has evolved to be so meaningful. I work with mostly Indigenous kids and I see families out in the community and they’re wearing them. I was just at a conference where an elder was there wearing one, and she just had such a heartfelt story to tell me about it. She just kind of bared her soul. I thought even sharing that small story with other people has such a huge impact.

I feel really proud when I can say I helped cut that. Last month, Justin Trudeau was wearing one and I was like, I know for a fact that my husband and I cut that.”

Daroux said the cultural piece is quite important, too. Anyone can read about Indigenous cultures, but experiencing the culture is very different. Those who participate in the fast and the ceremonies of the day are given an opportunity to look at their learnings through an Indigenous lens.

“They get to live through it and they get to experience first-hand the strengths within… Indigenous cultures and traditions,” he said. 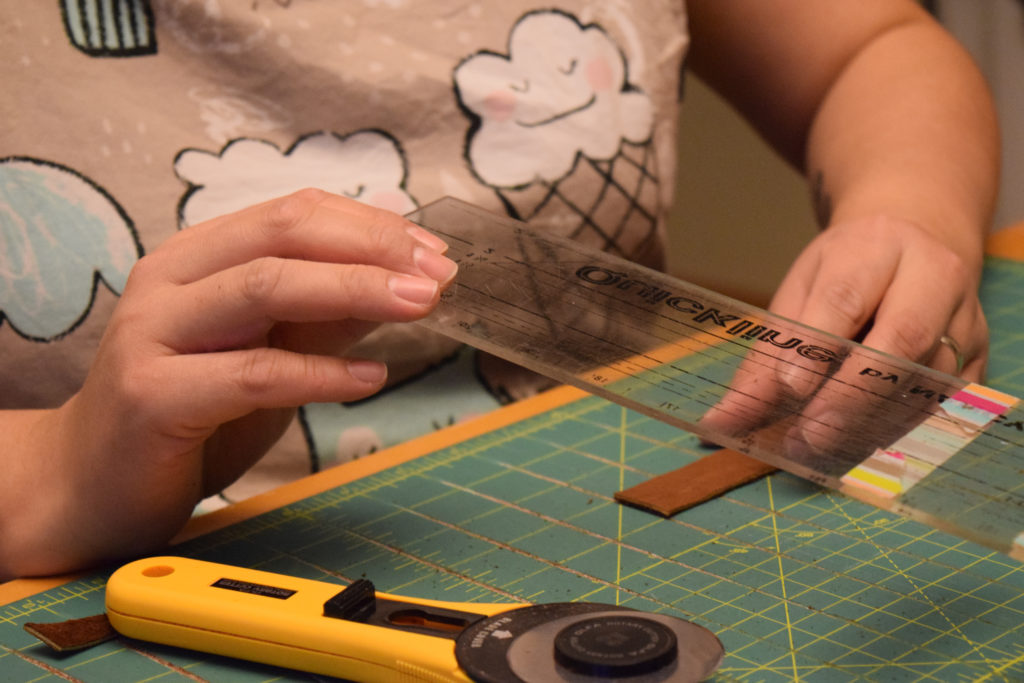 “I’m just so proud that this cutting portion is giving women the opportunity to help support their families and also to contribute to their communities. A lot of the women who cut are out here on the peninsula. Transportation is an issue for a lot of people. There aren’t a lot of job opportunities that are like this, that are flexible, and I feel like this has meaning, too.

We have kits that we give out to the other women, so they get this mat and the rotary cutter and a ruler. It makes all the difference. What I do know about some of the other women who cut is that it’s often with family. I think all the women cut around their kitchen tables. None of them have a separate workspace, which is nice because when you have kids or grandkids it’s just something you can do while they’re playing. It’s such an amazing way to support women.”

Daroux is impressed by how much the Moose Hide campaign has grown. He said the RCMP will continue to support the campaign and bring it to more divisions across Canada and other government agencies, to help spread the message further.

“Violence against women and children doesn’t know any cultural bounds or divisions, it exists everywhere,” Daroux said. “So this is something that I think people from all walks of life can look at and say ‘absolutely, it’s time we take a stand against this.’” 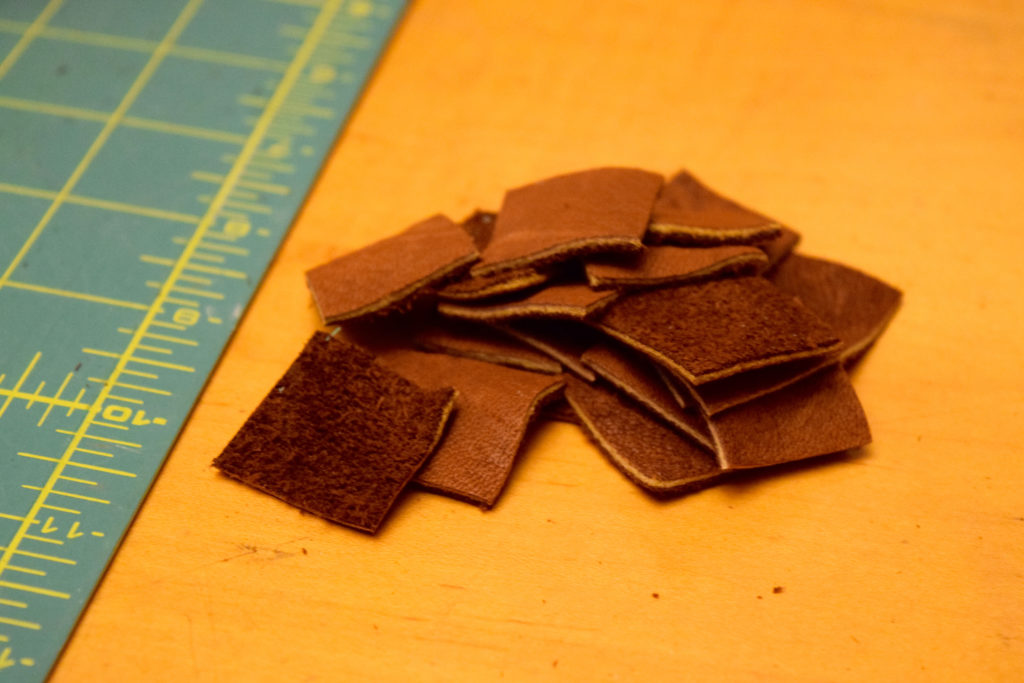 “Sometimes I feel like in the media, I was just reading today about Marlene Bird, [a residential school survivor who recently died after being brutally attacked]. I was so devastated by it. The life I’m living right now, I don’t see it. Sometimes it feels like ‘is this campaign as needed as it is?’ and then there are things that happen with my students, or that I read about, and then I realize, yes.

One thing I take away from this campaign is just, what I can do, is model healthy relationships and a healthy life for my kids. Then also raise them to know, both of them, that we don’t ever treat people like this, and you also don’t let anyone treat you like this. I can’t change what people are doing, but I can raise two amazing Indigenous kids who will go out, and this will never be their life. That is my hope.” 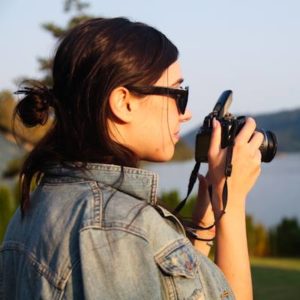 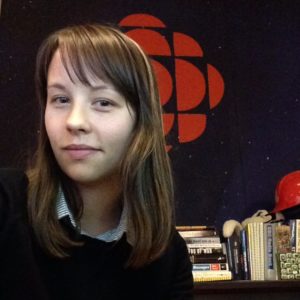 Laura Beaulne-Stuebing is a reporter for CBC/Radio Canada. She has also worked for the National Association of Friendship Centres and iPolitics. She is based in Ottawa.