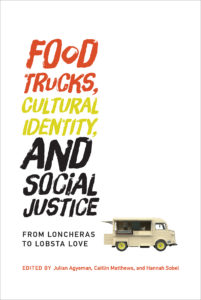 The urban foodscape is changing, rapidly. Fish tacos, vegan cupcakes, gourmet pizzas, and barbecue ribs, and all served from the confines of cramped, idling, and often garishly painted trucks. These food trucks, part of a wider phenomenon of street food vending or ‘street foods’, while common in the global South, are becoming increasingly common sights in many cities, towns, and universities throughout the United States and Canada – the focus of this book. Within the past few years, urban dwellers from creative class gourmands to late night revelers, from savvy and cost sensitive tourists to office lunch groups, from construction workers to school children have flocked to these new businesses on wheels to get their fix of food that is inventive, authentic, and often inexpensive. Collectively, and at street level, these trucks are indeed “magical urbanism on four wheels,” a powerful affirmation of “pop up urbanism,” of cultural place-making.

In New York City, there is abundant evidence of differential treatment by local politicians and their enforcement personnel based on whether the vendors are perceived as creative class, hip, entrepreneurial trucksters or illegitimate, immigrant hucksters.

Although some cities that host food trucks encourage their proliferation, others throw up regulatory roadblocks. In some US cities like Portland, Oregon, and Los Angeles, California, however, mobile food vending is less of a recent phenomenon. In Los Angeles, the Latino/a immigrant diaspora brought with it the street food traditions of many countries, in the form of food trucks known as loncheras. And the relaxed permitting processes in Portland, Oregon, has meant that it has a storied history of street food vending which has now become a firm fixture in the city’s renowned hipster gastro-tourist experience. In New York City, there is abundant evidence of differential treatment by local politicians and their enforcement personnel based on whether the vendors are perceived as creative class, hip, entrepreneurial trucksters or illegitimate, immigrant hucksters.

This book examines the food truck phenomenon in North American cities from Los Angeles to Montreal, taking a novel perspective: social justice. It considers the motivating factors behind a city’s promotion or restriction of mobile food vending, and how these motivations might connect to or impede broad goals of social justice. The contributors investigate the discriminatory implementation of rules, with gentrified hipsters often receiving preferential treatment over traditional immigrants; food trucks as part of community economic development; and food trucks’ role in cultural identity formation. They describe, among other things, mobile food vending in Portland, Oregon, where relaxed permitting encourages street food; the criminalization of food trucks by Los Angeles and New York City health codes; food as cultural currency in Montreal; social and spatial bifurcation of food trucks in Chicago and Durham, North Carolina; and food trucks as a part of Vancouver, Canada’s, self-branding as the “Greenest City.”