Common Wealth is a business dedicated to expanding access to retirement security. This interview with founding partner, Alex Mazer, focuses on the Common Good Retirement Plan, currently in development. The transcript has been edited for length and clarity.

Could you briefly explain the scale of the financial security problem in the non-profit sector that Common Wealth is seeking to tackle?

Roughly two million people work in the non-profit sector in Canada. From our analysis, we know that about half of that group don’t have access to a workplace-based retirement savings plan. If you look at the outcomes for people in Canada without workplace retirement plans — particularly those on modest incomes — they tend to be highly reliant on government programs like Old Age Security, the Canada Pension Plan and the Guaranteed Income Supplement. The median savings for Canadians approaching retirement without workplace pensions is only $3,000. 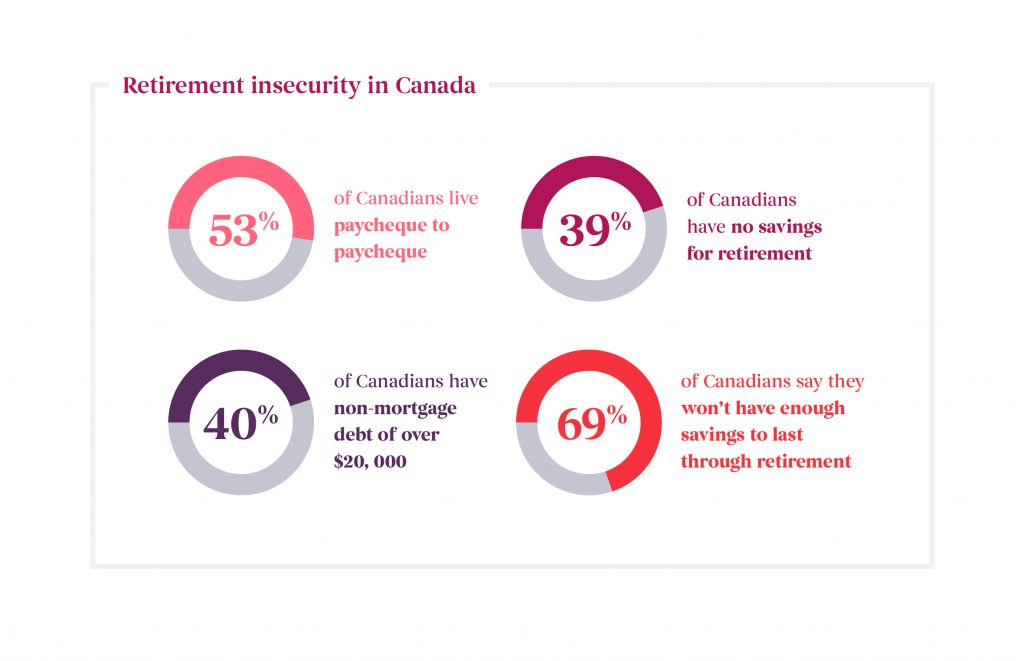 What elements have you put in place to help make the Common Good Retirement Plan succeed?

Traditionally, large workplace-based pension plans work very well. Canada has some of the best pension plans in the world. So we’re trying to bring in some of the design principles of those plans. But we also need to incorporate unique features like portability, as well as flexibility.

The non-profit workers we’re targeting  tend to work for smaller and mid-sized organizations, and earn less than the average Canadian. They are more likely to be women and people of colour, and less full-time, stable employment. The plan will be open to freelancers and those without traditional employer relationships. The program has been designed specifically so these people can take it with them from job to job. We also want to make it simpler and easier to use. Some people in the non-profit sector may not need or want to make the kinds of contributions that are common in the bigger pension plans. We also want to help people preserve their government benefits — we don’t want their entitlements clawed back of their savings. That’s why we’ve built Common Good around the Tax-Free Savings Account — this is how workers can get the maximum “bang for their buck”.

What actions can or should the federal government take to improve retirement security for Canada’s non-profit employees?

In countries around the world that have tackled this problem successfully, governments have typically played an important role. That can mean setting up appropriate structures to enable retirement savings plans, or funding the creation of such plans, or passing laws to require employers to enroll employees in a plan. In Canada, we want the government to become a partner in this plan so we can achieve the necessary scale and help as many people as possible.

Efforts to improve retirement security appear to have been led by several sectors over the last two to three decades — governments at the federal and provincial level, labour, business, and others. Can you explain why pension innovation requires cross-sector collaboration?

We did a study for the World Bank to answer the question of how Canadian pension plans have become among the best in the world. One of the factors we found was the collaboration of business, labour, employers, non-profits and government. We’ve tried to replicate some of these successful collaborations. So we have six leading foundations supporting us, as well as Vancity — Canada’s largest credit union — and employers. We’re now looking to the government to be a major partner of ours, not just in funding but also in the critical work of educating Canadians about the importance of long-term retirement planning. Unions are also critical partners because they want to do the right thing by their members.

How important is scale when it comes to pension plans? Is there such a thing as too small? Or too big?

Typically, yes, bigger is better, in particular if you have a fiduciary structure — that is to say, if you require the benefits of scale accrue to the members of the plan. For Common Good, as the plan scales, the benefits of size will flow to members.

What are the prospects for a large number of non-profit employees signing up for pension plans such as Common Good?

Our company — Common Wealth — has been in business for five years, and Common Good is just one of our initiatives. We’ve been working on Common Good for about two years. Over a 100 employers from 12 provinces and territories have committed to sign up their employees when the plan becomes available. We think with the right funding and partnerships in place we could scale the plan to 50,000 employees within four to five years.

Retirement security is a challenge for non-profit workers, but is it a widespread problem outside of this sector? How is flexible, gig-work, part-time work contributing to the lifetime savings shortfall?

There are over 10 million Canadians without a workplace retirement plan. People without these pension plans have saved very little money. Many are struggling with “asset poverty”. They would not be able to come up with two or three months of income in one go if needed.

Some of the reasons are structural: rising costs of living and stagnating incomes. However, there are some things we can do to reduce wealth and income inequality right away. So because the nature of work has changed — people change jobs more frequently, fewer people have stable, permanent employment — employers are less likely to offer workplace pensions. This is the challenge we are seeking to address through Common Good.