EWB lauded in The Guardian for publishing failure report 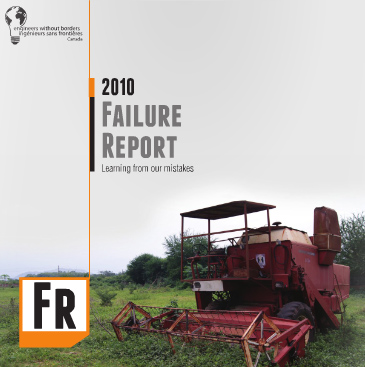 Engineers Without Borders (EWB) recently released a candid document entitled “2010 Failure Report: Learning from our mistakes,” which has caught the eye of the UK based news site The Guardian.
In the article, journalist Madeleine Bunting writes:
“I’m full of admiration for a Canadian NGO that is breaking all the rules by publishing a failure report. Engineers Without Borders has bravely catalogued various mistakes in its projects. Project officers come clean in a series of snapshots of what they did wrong…
“Engineers Without Borders is boldly suggesting that we learn from failure, and by putting itself on the line, it is hoping to encourage plenty of other NGOs to do the same… The idea is to kickstart a more honest conversation with the public (who, after all, provide a lot of NGO funding) about what their money is doing.”
In tandem with their report, McConnell grantee EWB is also launching admittingfailure.com, a sounding board for all NGOs to publicly own up to their failures.