In 2015, Concordia University changed food services providers, putting an end to a 13-year relationship with Chartwells.

Concordia had officially joined a growing list of Quebec and Canadian institutions opting to use their purchasing power to encourage more sustainable farming and contribute to the creation of a strong local food system. Food Secure Canada (FSC) is a group promoting Canadian food security and sovereignty. Their Institutional Food Program Manager Jennifer Reynolds weighs in on the move, “It’s a question of public money. Funds can be used to correct the balance between industrial food production and smaller-scale local food production. Our local food system is not as resilient as it should be.”

Concordia’s project was exciting and natural––after all, for the past few years its campus clientele has increasingly been asking for healthy, fresh, local food, not unlike many consumers these days. However, as with other public institutions that had begun the food shift, Concordia quickly learned that the path was not clear of obstacles. There is much ground to be broken in local, sustainable food supply work. Many systems and processes are yet to be developed. The university had to roll up its sleeves and demonstrate its commitment to genuine––not just cosmetic––change. 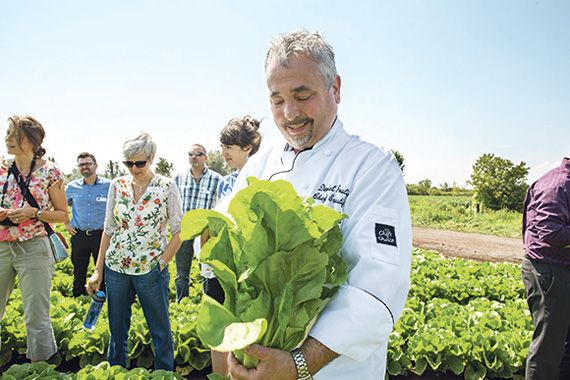 Daniel Poulin, Aramark Executive Chef at Concordia University, examines a head of lettuce during a visit to a local farm.

Step One: Review the Contract

Concordia couldn’t use its existing contract, having not launched a call for tenders in 13 years. The university formed a committee and solicited participation from students, professors, and employees to write a new contract. The challenges emerged rather quickly, explains Concordia’s Sustainable Food Systems Coordinator Isabelle Mailhot-Leduc. “We wanted to define locally sourced food in terms of kilometres travelled, but we quickly figured out that suppliers don’t have that type of information,” she explains. “They are supplied by distributors who buy in bulk at the best price, like on a stock exchange.” Concordia’s project managers then decided to start the process of data gathering themselves, by combining awareness-raising visits to distributors with field visits to producers. Obstacle two: what exactly is a local product? Can a Mexican-grown head of lettuce that is packaged in Quebec be part of the local food quota?

Aramark won the contract, and among Concordia’s stipulations was that Aramark hire a full-time sustainable food specialist. Since Aramark had no such position, they created it, and Vanessa D’Antico became Isabelle Mailhot-Leduc’s alter ego. Both D’Antico and Mailhot-Leduc claim that a key factor in the project’s success is cooperation between supplier and client. Consider the menus, for example. Aramark controls 100% of Concordia’s kitchens: it sets the menus, provides the food, and makes the recipes. Even the chef is an Aramark employee. “The recipes we offer our clients are identical across Canada,” explains D’Antico. “They don’t necessarily take into account regional agricultural differences. In order to respect the local food quota that Aramark and Concordia have committed to, new recipes needed to be added.” Mailhot-Leduc adds, “Vanessa and I did the research together. Then, Vanessa lobbied Aramark to make sure those recipes were added to the menus.” In addition to integrating local foods, these recipes mean new Quebec-based suppliers can make it onto Aramark’s supplier list. But once again, the group had to start from zero. “For example, Aramark didn’t have a beef supplier in Quebec,” explains D’Antico. “So Isabelle and I had to find one ourselves, and it took us a year. Quebec only has two federal government-certified slaughterhouses.”

Two years after its launch, what do the major players in the project think of it? “We’ve kicked off an important change,” muses Hospitality Concordia Director Marie-Josée Allard. “Now, we need to be patient. This type of thing doesn’t happen overnight.” The budget is yet another among the constellation of challenges to consider. “It’s a challenge, but not an insurmountable one,” affirms Reynolds. She cites the University of Winnipeg, who completely revised their food supply system in a budget neutral way––there were no price changes for customers, and no changes to profits. “Many activities were outsourced to a social enterprise that recruits immigrants and at-risk workers,” she says. “Additionally, the chef replaced numerous prepared frozen delivered foods with fresh foods prepared in the university’s kitchen. That way, the price of prepared foods is transferred to the staff that prepare the food on site.”

Over the course of the project, Concordia also learned that quality could be a challenge. Take onions, for example. “We asked distributor Hector Larivée why he didn’t offer Quebec onions,” says Vanessa D’Antico. “He explained that they’re less pretty than those from California. Because of cold temperatures, part of the Quebec onion crop is warehoused, whereas California onions never are. As a result, California onions look better.”

However, the project’s major issue remains traceability. Suppliers aren’t in the habit of tracking the origins of the products they use; it’s simply never been asked of them. Traceability processes need to be defined, and certification is essential. “A year ago we set up stations with the Aliments du Québec au menu logo,” says Mailhot-Leduc. “To earn that certification, 50% of the weight of the meal’s ingredients have to be produced locally. Those stations are very popular.” This pilot project is part of a larger Équiterre-led initiative in Quebec, which includes 26 partner institutions that serve 15 000 meals per day. Among these partners are healthcare institutions, daycare services, primary and secondary schools, higher education institutions, and public institutions. The 26 institutions have earned the Aliments du Québec au menu certification for having developed meals (121) primarily consisting of Quebec-grown foods or for sourcing at least 51% of their food supplies from Quebec-based suppliers. Another notable initiative is Nourish, a national community of 25 innovators––four Quebec institutions among them––who are targeting systematic changes to the food in healthcare facilities. This initiative is part of the J.W. McConnell Family Foundation’s Sustainable Food Systems initiative, which also supported the launch of Concordia’s project.

The Nourish initiative, Aliments du Québec au menu certification, and Concordia University’s food policy shift all face the same challenge: “Mentalities need to change,” affirms Mailhot-Leduc. “Institutional clients like us need to become more familiar with agricultural production and to rebuild our relationship with farmers. That goes against the standard mass production model that we’re used to.”